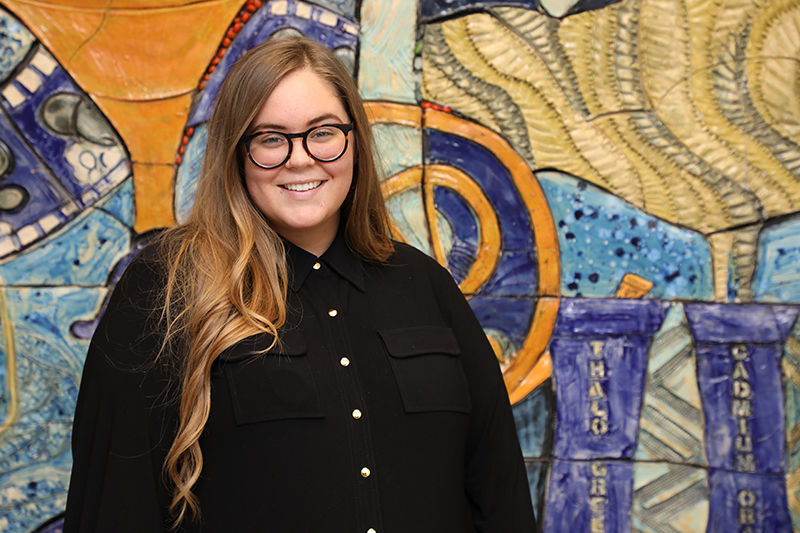 Graphic design student, Courtney Boyd, first found out about being a media creator for the Bentonville Film Festival (BFF) through one of her favorite social media platforms: Instagram.

“The field producer for the Ozark Media Arts Festival messaged me on Instagram, complimented my photography that I post on my account, and asked if I wanted to join their student team for BFF. Of course, I said yes, and she sent me a form to fill out to apply,” she explained.

Courtney applied and was selected to be placed on a team of creative high school and college students, or student media creators, eager to build their portfolios by capturing video, photo and social media content for the Bentonville Film Festival.

The Student Media Creators program was developed by a partnership between the Bentonville Film Festival and the Ozark Media Arts Festival. The Bentonville Film Festival was co-founded by Academy Award® winner Geena Davis and Inclusion Companies CEO Trevor Drinkwater to facilitate actionable change toward balanced, diverse and inclusive media. The Ozark Media Arts Festival is the premiere festival in the Midwest that showcases video and photography by high school and college students, and has been producing BFF’s photos and videos for the past four years. Northwest Arkansas Community College (NWACC) is one of the sponsors of the student media creators program.

“In eight years of hosting the Ozark Media Arts Festival in northwest Arkansas, we have provided hundreds to thousands of opportunities for young professionals to showcase their work in professional settings,” said Ozark Media Arts Festival Founder Trent Jones. “We are very proud to have partners like the Bentonville Film Festival and Northwest Arkansas Community College. We are looking forward to working with Courtney and helping to provide a platform to showcase her work, and help build relationships that could catapult her into new opportunities.”

As a student media creator, Courtney’s role will be capturing photos of celebrities, vendors and various events. So far, she’s been assigned to cover BFF co-founder and actress Geena Davis, the opening event and the exclusive after party.

In addition to exposure and networking opportunities, her content may be used to build demo reels and media examples for future career opportunities. As a student media participant, Courtney will receive a certificate of completion at the end of the program.

“I believe the experience is going to continue to propel me into the path of using photography and graphic design to give companies, organizations or causes an effective voice on social media,” she said.

Courtney credit’s NWACC for preparing her for the opportunity to be a media creator for one of the most influential film festivals.

“The best way NWACC has helped prepare me for BFF was by taking the digital photography class by Erin Gardner. She helped me learn so much about this beautiful thing called photography, but she also challenged me to step out of my comfort zone and here I am now,” she said. “It’s amazing to see what being a part of this NWACC community has done as far as opening up so many doors and expanding my artistic horizons.”

Courtney also feels strongly about the college’s dedication to investing in the future of arts and media, not only as a sponsor of the BFF program or a provider of fine arts academic programs, but as northwest Arkansas’ resource for integrated design learning.

NWACC is in the process of building the Integrated Design Lab for students pursuing an education in arts and construction technology. The facility will house space to support sculptures, ceramics, a Fab Lab with 3D printers, a CNC router, laser cutting equipment and other tools. Students will be encouraged to test creative entrepreneurial ideas by utilizing the skills learned in various construction and art courses.

“It’s just crazy amazing to me that Arkansas is able to have NWACC’s new Integrated Design Lab coming [too], because it makes the level of education and arts become limitless, yet also so accessible!” Courtney said.

UPDATE: Learn about Courtney's experience being a student media creator for the film festival on our follow up blog story.