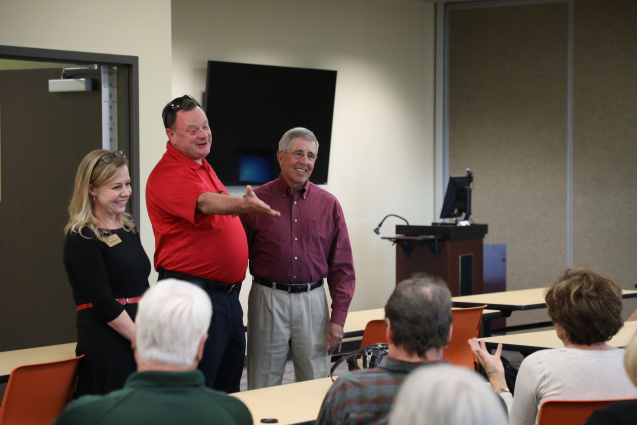 Tucked away in NWACC’s Center for Health Professions, a storage closet demonstrates a generous commitment to helping some students who will be trained to help others.

Protective eyewear and a couple dozen pairs of cargo pants fill the closet's metal shelves, while on the rack nearby, boots and steel-toed shoes are arranged neatly by size.

NWACC Emergency Medical Services Professor Scott Byrd can easily remember the defining moment that started this journey. His class of emergency medical service students had been informed they needed proper uniforms for their clinical rotation. After class, a young woman approached him. She couldn’t afford the expense of the uniform, she said.

Byrd sprang into action and collected the items needed — a red shirt he purchased from Walmart, a pair of borrowed cargo pants in the student’s size, some steel-toed shoes. With a little effort, the student was set.

However, the young woman’s frankness set him to thinking. “I knew if she had guts to say something to me, there were probably others in need who wouldn’t speak up.”

Byrd started collecting the clothing items that would equip students for clinicals. He posted a call on Facebook, and he reached out to friends in emergency medical services.

At first, he tried to thank each contributor, but soon there was an avalanche of donated items — too many to acknowledge. “It was phenomenal,” he recalled. “I would find clothing in my office, and I didn’t know where it came from.”

Items went from being tucked in the nooks and crannies of his faculty office to being placed on the more organized shelves in the health professions storage room. Now, the college’s academic department provides the shirts worn by students and the rest of the gear like the cargo pants and protective equipment is donated.

Another conversation, this one with an employee at a fast-food restaurant, spurred Byrd to think about another way to help students. The employee told Byrd she wanted to take his class, but was concerned about the money to pay for school.

Shortly after that, during an assembly at the beginning of the Fall 2017 semester, Byrd heard from a former student who established a scholarship at NWACC. The alumna’s philanthropic actions inspired him.

“I was sitting next to our dean (Mark Wallenmeyer), and I told him, ‘I’m going to do that — start a scholarship,” he recalled.

Scott and his wife, Yolanda, both graduated from the college’s paramedic program. They wanted to start a scholarship for EMS students.

Scott Byrd met with Karen O’Donohoe from the NWACC Foundation. She told him that they needed a name for the scholarship. Just one name came to mind — Dr. Monte J. Gagliardi. Byrd credits the former faculty member and dean with turning around his own college career. “I was a bad student, with maybe a 1.65 GPA,” he recalled. He walked into Gagliardi’s class, and it was a complete transformation. “It just flipped a switch on for me.”

Gagliardi not only changed the trajectory of Byrd’s college career. He also helped him land jobs and even wrote a letter of recommendation for grad school.

“He was instrumental in my life — big time,” Byrd said.

On Nov. 28, designated as #GivingTuesday, Scott and Yolanda Byrd surprised Scott’s mentor with the announcement of plans for the Dr. Monte J Gagliardi EMS Scholarship. The couple presented an initial gift of $2,000 from them and other family members. The special announcement kicks off a campaign to raise additional dollars.

Scott Byrd already has succeeded in inspiring others to help support students as evidenced by the almost overflowing storage room. He’s hoping that now others will give in the same generous fashion to the scholarship.

“We’re going to shoot for the moon and hopefully help some people in the future,” he said.