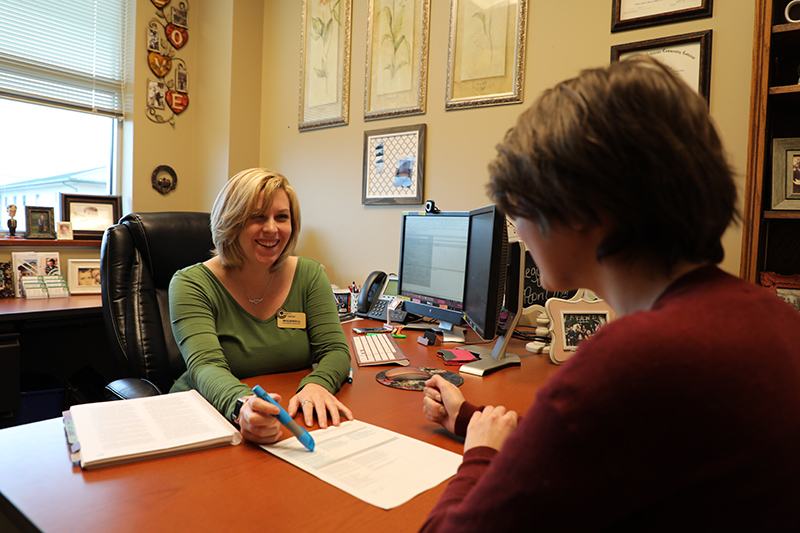 It’s no easy task to sum up Erin Hollingsworth — in seven words or in 700 words.

She’s student-focused, for sure. In previous roles and in her current job as Career Services Coordinator, Erin’s a ferocious champion for NWACC students. That’s especially true for students who may have delayed enrolling in college.

“I think through my own experience, it was kind of an impulse decision for me to come back to school when I did,” Erin says. “Whenever I see students coming in last minute or waiting to do something, I know sometimes it was just a spur-of-the moment decision or at that point something motivated them to pursue education. I want to have an open mind to all the students and just make them feel welcome.”

Erin’s own higher education journey was marked by a couple of stops and starts.

She began her studies at NWACC as a freshman and then after her first semester, she discovered she was pregnant. At 19, she was a single mom.

“I decided not to come back to school,” she recalls. “I went into the real world and I started to see the value of school because when I was looking at jobs, everybody wanted a degree.”

She started talking to NWACC students. “Those conversations really encouraged me to return to school,” she says. She started back at NWACC and was aided by a couple of organizations — Single Parent Scholarship Fund of Benton County and the Career Pathways Initiative. Soon, she had not just one associate degree, but four, and a couple of certificates, to boot.

That’s just the beginning of her evident motivation and drive. From receiving those multiple associate degrees, Erin went on to study online through Columbia College in Missouri and earned her bachelor’s degree. Now, she’s working on a master’s degree in College Student Personnel from Arkansas Tech. She’s wrapping up this semester and has one more to go. No thesis is required, so when she completes coursework, she should be able to receive her degree — and add to her collection.

Erin hopes her own educational journey may help and inspire others.

She’s also good at finding humor in her world.

Case in point: Erin’s talking about how faculty and staff at NWACC encouraged her to pursue her education and why that was so important to her. Matter-of-fact, she says, “If you would have told 19-year-old Erin that she’d be working on her master’s degree, I would have told you, ‘Shut up,’ cause that would not have been seen as a possibility at all.”

Juanita Franklin, director of LIFE (Learning, Improvement, Fun and Empowerment), says Erin possesses a great sense of comic timing and her fun spirit is unifying. “She is one that really brings people together with her humor,” Juanita says.

Earlier this fall, the two traveled to San Diego for the Hispanic Association of Colleges and Universities conference. Juanita mentioned to Erin that on takeoff, her husband, Greg, always holds her hand. Erin took her hand and posed for a Facebook-worthy photo of playing fill-in. In a comment, Erin’s mom, Mary, asked if Erin had to hold Juanita’s hand on the next flight. Juanita said they were separated. “We held the hands of strangers,” Erin quipped, “and they did not appreciate it.”

Erin credits her mom with instilling her brand of humor in her daughter, and now Connor, Erin’s 12-year-old son. “My mom is notorious at work for her humor,” Erin says.

Erin calls it an Irish sense of humor (her mom is an Irish native). Erin recently gained dual citizenship as a citizen of the U.S. and Ireland. Like mother, like daughter.

Erin’s current work in career services meshes with her own experience. “I work with any student that’s undecided about a major, kind of helping them find their path, find something that they’re passionate about and that they love to do,” she explains. She helps with resumes, mock interviews, social media and LinkedIn profiles, “basically anything to really prepare them for the workforce after graduation or even while they’re still a student.”

Her passion, she says, is higher education. She relishes her work at NWACC — for both the students she’s able to help and the people she’s able to work with.

“That really does make a huge difference,” she says. “I tell students If you’re going to do something 40-plus hours a week, do something that you love and that you care about. It should be a job where at the end of the day you go home and you feel good about what you’ve done.”

She first served as a work-study in Student Services and then as a part-time person before moving into an administrative assistant role in the team. She left the college for a while to work in the supplier community. “I got a lot of good experience and I learned a lot, but really my heart was in higher education,” Erin says. “As soon as I received my bachelor’s degree, I saw that there was a recruiting position open at NWACC, so I applied and was lucky enough to have the opportunity to serve in that position.”

It’s important to Erin to serve in official roles — and unofficial ones that support students and the college. In the summer, she did an internship in Student Records, where she learned a lot about the operation of another department. She also has volunteered to assist with the LIFE program, which Franklin directs.

“One of the biggest things that’s been very fulfilling is being a part of the LIFE program and having an opportunity to work with those students,” Erin says. “It’s really changed my perspective on a lot of things, and it’s kind of made me more aware of how important it is to be an ally to students.”

Her can-do spirit, her dedication and her commitment to higher education perhaps made her an obvious choice for the Outstanding Full-Time Staff Member Award. Erin honored the honor this past spring and represented NWACC at the annual Arkansas Community Colleges conference in the fall.

In addition to those characteristics, Erin admits to being a bit of a nerd. When an opportunity became available to serve as adviser to a new Geek Alliance, she was definitely on board. In that capacity, a Facebook post of hers displays an image of her riding in a Student Center elevator with a Darth Vader display.

Erin says she’s sometimes invited to help in activities because of a quirky skill set.

“I get involved a lot because I’m a Google forms and Excel nerd. Anytime somebody comes up and has an Excel issue, I don’t think of it as an annoyance,” she says. “I think of it as kind of a fun challenge. I love Excel.”

Yep, Erin’s amazing — and perhaps the right person to be Geek Alliance adviser.