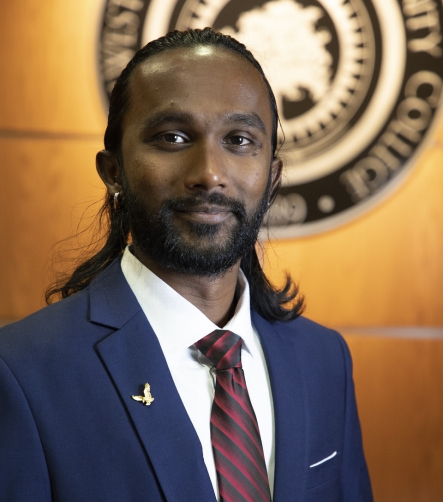 Moving from across the world to attend a community college in the state of Arkansas is a big decision, one that NorthWest Arkansas Community College (NWACC) student and Golden Eagle Award winner, Ari, has no regrets making.

Ari had graduated with a degree in physical therapy in his home country of Malaysia and was having difficulty finding work. His sister and brother-in-law, located in northwest Arkansas, encouraged Ari to come to the states to study and find a career.

“My sister suggested that I go into nursing at NWACC. She offered to help me get all of my paperwork together so I could join NWACC,“ Ari said.

Moving from Malaysia to Bentonville, Arkansas, was only the beginning of Ari’s travel plans. Once he completes NWACC’s nursing program next fall to become a registered nurse, he plans to earn his bachelor’s degree at the University of Arkansas and then become a traveling nurse.

“My dream is to travel around the world. This is one way I can use my bachelor’s degree to travel the world while I’m working,” he said.

Ari’s dedication to strengthening his education, personal development and leadership skills, as well as his authentic eagerness to participate in NWACC Registered Student Organizations have led to his nomination for NWACC’s Golden Eagle Award. This October, Ari won the prestigious award.

NWACC students who are nominated for the Golden Eagle Award must have a minimum 3.0 grade point average and demonstrate a commitment to education, social awareness, and personal development and be involved in varied activities. Recipients receive a certificate of recognition and a $100 check from the NWACC Foundation at the NWACC Board of Trustees meetings.

Ari was nominated by Lou Lo, NWACC’s international student advisor and advisor for the Citizens of the World club.

“The first day that I met Ari was back in August 2017, I knew he was going to be a leader at NWACC,” Lou said. “He is passionate in helping all students, but who he loves helping the most are the international students. He’s been where they are and knows the struggles and challenges that international students face.”

As the vice president of the Citizens of the World club at NWACC, Ari enjoys interacting and assisting international students and creating student led events that range from food sales to an end of the semester retreat.

Ari is also involved in a number of other NWACC associations and clubs. He’s the Student Ambassador and Government Association (SGA) Director of Communications, the Music Club Public Relations Officer and a member of the IFriend program.

The iFriend program, where international students are connected with a family in the surrounding community, has been an outlet for Ari to experience the American culture. He recently attended a Naturals game – northwest Arkansas’ minor league baseball team – and enjoyed joining in with fans by cheering, dancing and eating popcorn.

Outside of classes, clubs and activities, Ari is actively reaching out and befriending fellow students. Lou has noticed how Ari’s positive interactions have impacted everyone around him.

“I have seen how the environment changes when he is present. Ari talks to everyone and he has so many life experiences to share with others, such as food, cultures, history, languages, politics and much more,” she said.

The Golden Eagle Award winner has learned a lot while attending NWACC and living in the U.S., and offers advice for any student struggling to reach their goals, whether they are personal or educational.

“Success is not built on success. It’s built on failure, frustration and fears that you have to overcome. Sometimes it takes a good fall to know where you stand. Every time we think we’re rejected from something good, remember, we’re just being redirected to something better,” Ari said.