Rachel Hamburg’s a small part of something really big — cosmic kind of big.

Rachel, a 2014 NorthWest Arkansas Community College (NWACC) alumna, was on a research team analyzing data in a significant scientific discovery in 2017. Two neutron stars collided some 130 million light years away, and researchers were able to observe gravitational waves and a gamma-ray burst from the same event. Put another way, this was the first time a cosmic event was observed in both gravitational waves and light.

In the scientific community, the development was huge. Scientific American magazine identified it as one of its top 10 science stories of the year. 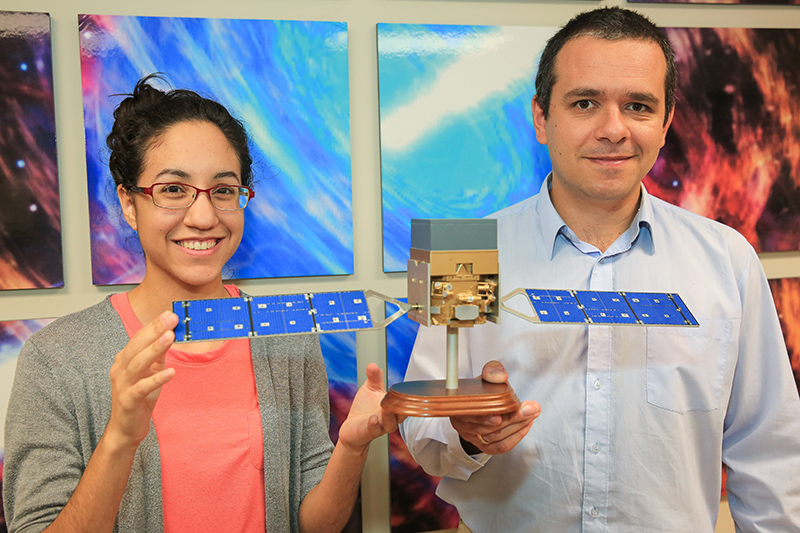 A graduate student at the University of Alabama in Huntsville, Rachel had not just a front-row seat to the discovery, but played a part. Rachel is a research assistant working with the Fermi Gamma-ray Burst Monitor (GBM). The Fermi GBM was launched in 2008 and is the NASA instrument that detected the gamma-ray burst from the binary neutron star merger. “This is most exciting discovery of the Fermi mission,” Rachel says, “and I can’t believe I get to be a part of it all. It’s been unbelievable.”

She contributed to two academic papers related to the event. According to a news release from the University of Alabama in Huntsville, she developed some of the software used in the analysis of data. She is one of the authors of “An Ordinary Short Gamma-Ray Burst with Extraordinary Implications: Fermi-GBM Detection of GRB 170817A.”

Recently, the Fermi Gamma-ray Burst Monitor team was selected as the recipient of the Rossi Prize awarded annually in honor of Bruno Rossi “for a significant contribution to High Energy Astrophysics, with particular emphasis on recent, original work.” More about that honor can found in this recent UAH news release.

Rachel’s experiences at NWACC shape her thoughts about her research work today.

She came to NWACC after having been home-schooled, and the smaller class sizes and more individualized attention appealed to her. “When I started thinking about college, I wanted to get a bachelor’s degree,” she recalls. “But I was concerned that going to a big university would be a lot. I thought NWACC would be a great place to start. The classes would be smaller. I could talk to my classmates and my professors and really feel comfortable in that environment.”

She found NWACC to be a good fit. “It’s very easy to find out what’s here and just to be involved,” she says.

Rachel participated in Service Learning projects and in the Honors Program.  “We were working with a community service program about raising awareness about the Marshall Islands,” she recalls. “I enjoyed that a lot.” In Service Learning, she appreciated the flexibility and the ability to tailor projects to what the students believed would meet the needs or goals. “You’re given guidelines, but not specifics. You can work within that framework and really bring out what you find interesting while bringing awareness to important issues.”

The Honors Program faculty inspired her. “Especially in the Honors classes, my professors really pushed you to think creatively,” she says.

She had high praise for other faculty members as well. Valor Pickett, a history professor was discussing the slave trade and, to add a connection with the senses, turned out the lights while describing the conditions aboard ships transporting slaves to the New World.

Her first English class was under the instruction of Jim Laughton, and she recalls investing considerable time trying to make her papers top-notch. “He wanted us to write well,” she says. “I loved that class, and I worked so hard in that class.”

She also remembers studying Calculus I and Calculus II with Tracy Vaughan. “I really loved her classes because she taught it in a way that made you feel like everyone can understand this, you just need to work at it,” she says.

Rachel completed an Associate of Science at NWACC and transferred to the University of Arkansas, where she earned a Bachelor of Science in Physics. She’s now a master’s student at UA-Huntsville, and she hopes to enter doctoral studies later this year.

In her current role, Rachel recalls her time at NWACC and tries to apply lessons learned. For example, she says that the ability to write clearly is important to scientific writing. “The best thing about being in science is that you’re going to convey the truth and in a way that’s very fact-based,” she says. “When I write things, I remember a lot of what my English professors were saying and try to make sure I convey things clearly by using correct grammar.”

While people may complain about commas, Rachel says she knows it’s important to consider the proper usage when writing. “I heard about another research group, a big collaboration, spending maybe a week or two debating where a comma should go in a sentence because the comma changed the meaning of the sentence,” she explains.

That value for precision that NWACC English faculty instilled in Rachel serves her well in her current studies.

Today, she blends the precision of science with the passion for discovering how things work in the universe. At times, she’s clearly elated at being a part of the most recent discoveries in astrophysics. 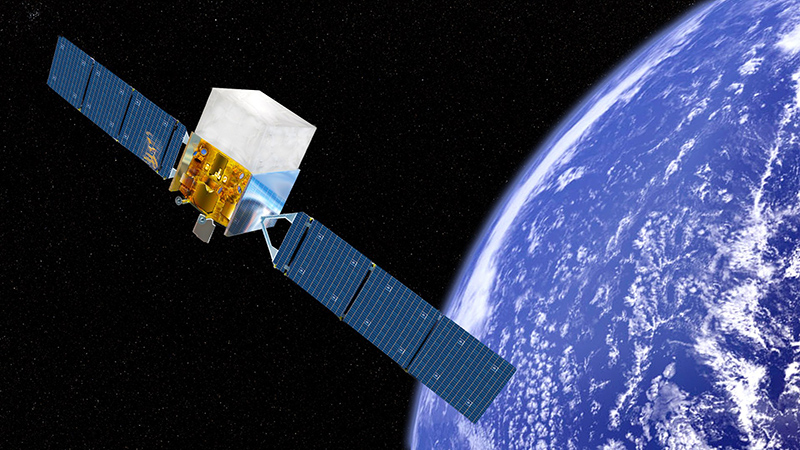 The Science Behind the Discovery

Gravitational waves and gamma-ray bursts aren’t normal dinner conversation for everyone. Rachel has a knack for helping the non-astrophysicist make sense of it all.

Rachel explains it this way: “When you have any type of matter that’s moving, it’s disturbing space. You can think of a fish moving in the water. As it’s swimming around, you get these waves coming from the fish moving. In a similar kind of way, when you have mass or matter moving in space, it’s giving off these waves.”

Albert Einstein predicted the existence of gravitational waves in 1915 in his general theory of relativity. Confirmation of Einstein’s prediction had come indirectly after two astronomers in Puerto Rico discovered a binary pulsar in 1974 and over years observed that the stars were getting closer together at the rate predicted by general relativity. In this century, three large detectors — two in the United States known as LIGO (Laser Interferometer Gravitational-Wave Observatory) and one in Italy known as Virgo — have come online and started physically sensing distortions in spacetime.

Previous detection of gravitational waves from LIGO and Virgo had only come from black holes and not two neutron stars colliding. According to space.com, neutron stars are created when giant stars die in supernovas and their cores collapse.

Rachel explains it this way: “Neutron stars are very old and at the end of their life. At some time, a neutron star was a big gaseous star. Eventually it ran out of gas or fuel. At that point, the star kind of exploded and a neutron star core was left.”

Neutron stars are massive. They’re described as the size of a city, but having more mass than the sun. “You’re sticking all of this mass into this tiny little region. It’s very dense, and it’s very heavy,” she says.

The two neutron stars were orbiting around and around each other. “As they’re going around, they’re emitting these gravitational waves because they’re moving through space,” Rachel notes. “As they emit the gravitational waves, they lose energy and get closer together. Eventually, their gravitational pull is strong enough to start ripping each other apart. All this ripped up matter then collides and explodes.”

Some of the matter from the explosion is funneled into two jets that spew all of this matter and photons (light), Rachel says. “It’s called a gamma ray burst because the majority of the light in that jet is in gamma rays, which is the most energetic form of light.”

It was a text message on Aug. 17 that alerted Rachel something extraordinary had happened.

“It was early in the morning, maybe 7:30,” Rachel recalls. “I got a text from a graduate student in LIGO that said, ‘We’re about to send out a notice to the astrophysics community. We saw a neutron star-neutron star merger.”

Rachel still becomes excited when describing the next part. “His next sentence — ‘and there was a gamma-ray burst two seconds later’ — made my heart start beating wildly,” she says. “My body began to physically shake because I knew if this gamma-ray burst had come from the same system that caused the gravitational waves, for us in astrophysics, this would be big.”

Gamma-ray bursts are detected often, she explains. “We get about one a day. We see them all the time.” But scientists were not positive what produced this particular type of gamma-ray burst.

Gamma-ray bursts occur in short and long forms. “We knew that the long ones came from stars that went supernova,” Rachel says. “We didn’t know where these short ones came from. We thought that they came from these types of [neutron star merger] systems, but we had never seen it, observed it, so we didn’t know.”

She says this event was significant for a couple of reasons. “It’s confirmation that these short bursts come neutron star-neutron star mergers,” she notes. “Like I said, before we didn’t know, and now we know. We know where these things come from. They’re not completely mysterious in that sense anymore.”

“I think it’s also important because there were so many people who worked on this one event,” she says. “Every single continent had a detector that contributed to this, so literally it was a worldwide effort.”

Her team working with the Fermi GBM was only one group of many making observations related to the event. There were the researchers involved in gravitational wave detection. Optical astronomers pointing their telescopes to that region of the sky saw what’s called a kilonova explosion that was first very blue and then eventually went red. View a video combining real images and artists’ illustrations.

Each specific group of researchers will be focused on their own area, “but when you bring it all together, that’s when you really start to learn things about physics and about the universe,” Rachel says. “I think that’s super important, and it’s wonderful. It’s amazing that we can all do this, and in this day and age, too. A hundred years ago we didn’t have the technology to detect gravitational waves or communicate the information instantly. Even 50, 25 years ago, we couldn’t do this. This is a very special time.”

Rachel says she feels privileged to be a part of this moment of discovery. “I can’t believe that I’m here and working on this,” she says. “People have been working on this for decades. Einstein predicted gravitational waves a hundred years ago, and we’re just now detecting them. People today have been spending their whole careers to set up these pipelines so that when these things happen, we can automatically just go ahead and do the research. We don’t have to wait and figure out how to make this thing work. To be a part of that as a grad student…, to contribute my little piece, is just great.”