NWACC Board of Trustees Election Information

Northwest Arkansas Community College (NWACC) is governed by a local Board of Trustees composed of nine members who are residents and qualified electors of the NWACC taxing district, the Rogers and Bentonville public school districts.

Trustees are elected by zones for terms of up to six years by the qualified electors of each particular NWACC zone at the general election. All nine trustee positions will be up for election in 2022 due to the decennial census. Trustees elected in the 2022 General Election will draw for 2, 4, or 6-year terms upon swearing in.

Trustees are listed below by zone and their term expiration dates.

The map below showing the NWACC zones was approved by resolution by the NWACC Board of Trustees on Saturday, July 14, 2012, and by the Benton County Election Commission on Wednesday, July 18, 2012.

Candidates for the NWACC Board of Trustees run by zone and are elected on a nonpartisan basis. The order in which the names of the respective candidates are to appear on the ballot shall be determined by lot by the county board of election commissioners (Act 47 of 2017).

At the time of filing the statement of candidacy, the candidates files a petition containing the signatures of at least twenty-five (25) qualified electors from their own particular zone. Petition forms and notarized statements are available at the Benton County Clerk's Office, 215 E Central Ave, Bentonville, AR, Room 217.

For more information on NWACC's Board of Trustees, contact Grant Hodges, Executive Director of Community and Government Relations & Marketing, ghodges@nwacc.edu or 479-619-2227. 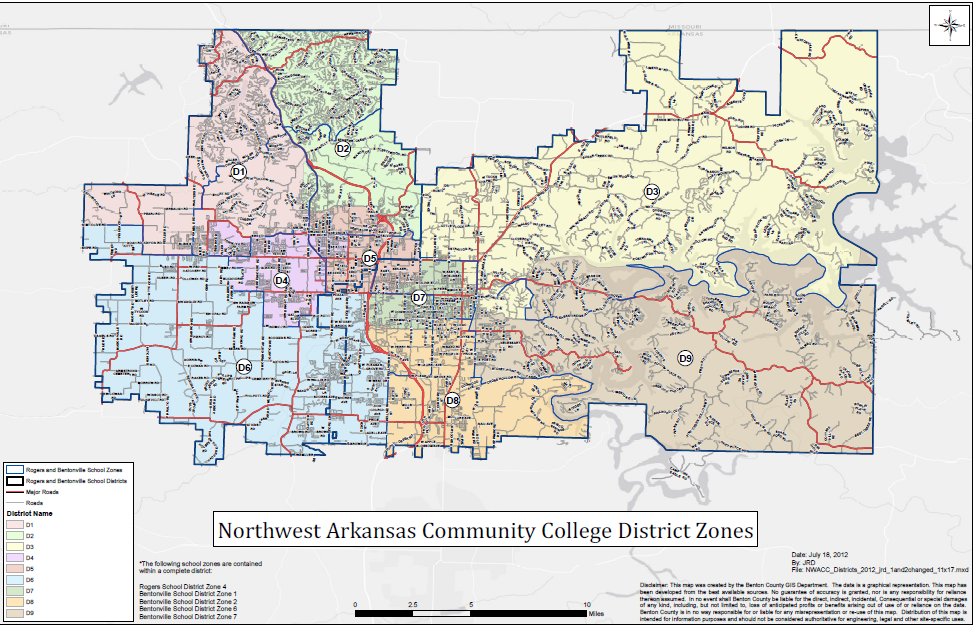