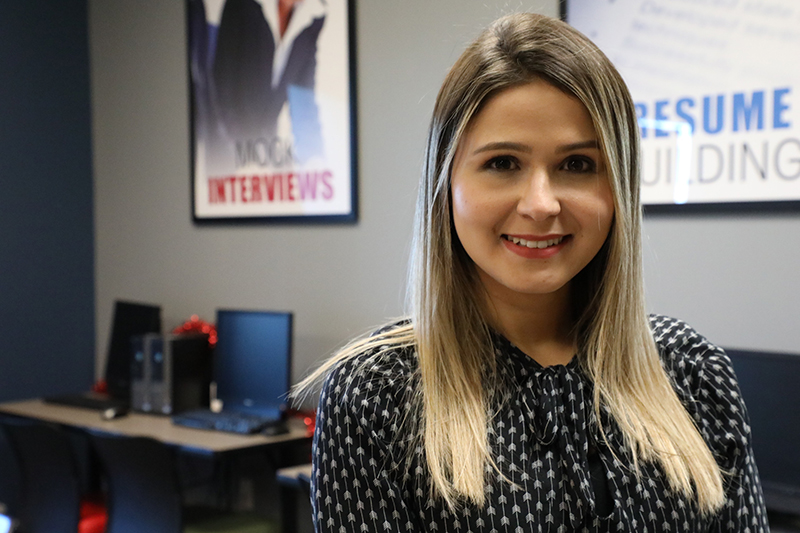 Anne Bartira Barros Merces, a May 2017 graduate of NorthWest Arkansas Community College (NWACC), learned in late December that she had been chosen for a position at Walmart corporate offices after serving in a temporary role with the company.

Anne credits NWACC and such offerings as the Career Services Center with her success.

She moved from Brazil to northwest Arkansas five years ago when her husband, Victor, enrolled in graduate studies at the University of Arkansas. She had a bachelor’s degree in physical education from a university in Brazil, but decided she wanted to pursue studies in America. She studied English as a Second Language, decided to pursue an Associate of Science in Business Administration degree, and found NWACC to be a good place to study and to get involved.

“I didn’t want to just come here, go to class and go home,” Anne recalls. “I tried to get involved as much as I could handle.”

Anne also became involved in Enactus at NWACC, a student organization that’s affiliated with a worldwide network that’s making a difference through the power of entrepreneurship. Enactus is an international organization that connects student, academic and business leaders through entrepreneurial-based projects that empower people to transform opportunities into real, sustainable progress for themselves and their communities.

“Those projects were really a great experience,” Anne says of her involvement in various initiatives. “I learned a lot and was able to help the community as well.”

She benefitted from some scholarships that helped pay the cost of her schooling. She received the Schwyhart Endowed Scholarship, which provides scholarship support to a student pursuing an A.S. in business administration. She also received a service learning scholarship.

Anne is complimentary of the NWACC faculty and staff, and she said she thinks the assistance they provided her is one of the things she’ll carry with her from NWACC throughout the rest of her life.

“I like the people,” she says, “the staff, professors and students.”

Preparing for the Future

When she was finishing her final semester in 2017, she knew she had some decisions to make. “I knew I didn’t want to transfer at this time,” she says. “I wanted to go to work.”

Erin Hollingsworth, who had been Anne’s academic adviser, was shifting into a new job, and Anne saw her. Erin explained some of her duties as Career Services Coordinator.

It was a perfect opportunity for Anne. “I felt like I needed someone to guide me through the job search process,” she says.

She first asked Erin for some help with her resumes. “I wanted to make sure that I had the right information and that it’s not too much,” she recalls.

As she started applying for jobs, Anne also knew that she could use some practice in interviewing to be sure she was putting her best foot forward. “When something is important, you tend to get a little nervous,” Anne says.

She says Erin encouraged her to think about the motivation behind each question and what the employer might be trying to determine.

A key takeaway for Anne was to stop and think about each question and how she could use that question as an opportunity to bring something positive to the employer.

As a part of Erin’s work through the Career Services Center, Anne was provided the chance to practice interviewing. “We did the mock interview, and Erin explained the process to me and then went through the questions asked and gave feedback on how I could improve my answers,” Anne says.

Another key learning for Anne: “Only you can tell your story.”

Anne had an upcoming interview with Walmart, and she credits the coaching and assistance Erin provided in helping her feel ready for that interview. “Working with Erin really helped get ready for my interview and to feel like, ‘You’ve got this,’” she says. “Through this process, I became more confident.”

Anne participated in the interview and soon had great news to share with Erin: She got the job. The job was at first a temporary one, but in December, Anne learned she would transition to a role that didn’t have that temporary status.

She had some words of advice for students at NWACC about the offerings of the Career Services Center. “Take advantage of the service,” she recommends. “Not everyone has the opportunity to participate in a mock interview. It’s a great opportunity for you to practice, be more confident and build your resume.”

Anne has both personal experience and a new job to back up her advice.

The Career Services Center offers a wide array of assistance to NWACC students and alumni members.

Services provided through the Career Services Center include:

Learn more about the Career Services Center and opportunities.