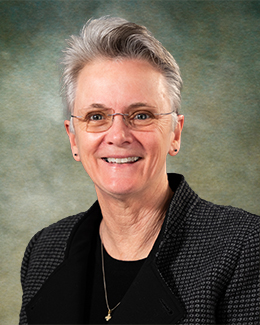 Lori S. Frank - RN, MSN, Captain, Nurse Corps, United States Navy, Retired - is a native of Richardson, Texas. She received her bachelor’s degree in nursing from Stephen F. Austin (SFA) State University in Nacogdoches, Texas and her master’s degree in Nursing Administration from the University of California Los Angeles (UCLA). In 2008, she was awarded a Post Mater’s Certificate in Nursing Education from the University of Texas at El Paso (UTEP). Throughout her career she has held certifications in emergency room nursing from the Emergency Room Nurses Association (1986-1991) and in nursing informatics from the American Nurses Credentialing Center (2003-2008).

Lori has had experience as a general duty staff nurse in a large healthcare facility and in medium sized ambulatory centers, both in the US and abroad. She has taught and designed curriculum for Basic Hospital Corps School, twice served with the Marine Corps and in two joint assignments with the Army and Air Force. She was appointed as the Navy representative to the Base Closure and Realignment Commission (BRAC) initiative to move all service enlisted medical training to San Antonio, Texas. Completed in September 2011, METC is the largest allied health campus in the world with an annual student throughput of 24,500.

Lori retired from active service in August 2013. In 2014, she was awarded Nurse.com’s Nursing Excellence Award for advancing and leading the profession. Since retirement, Lori has started Silver Eagles Wood Designs, a specialty wood company. During her working and retired years, she has served on the board of the Alamo Woodturners Pen Group, International Organization of Kings Daughters and Sons, American Nursing Informatics Association and the National Museum of Civil Ware Medicine. She is an active member of PEO, a philanthropic organization where women work to and celebrate the advancement and education of other women.

She currently resides in Bella Vista, Arkansas and looks after her mother and enjoys biking, kayaking and all other outdoor activities.