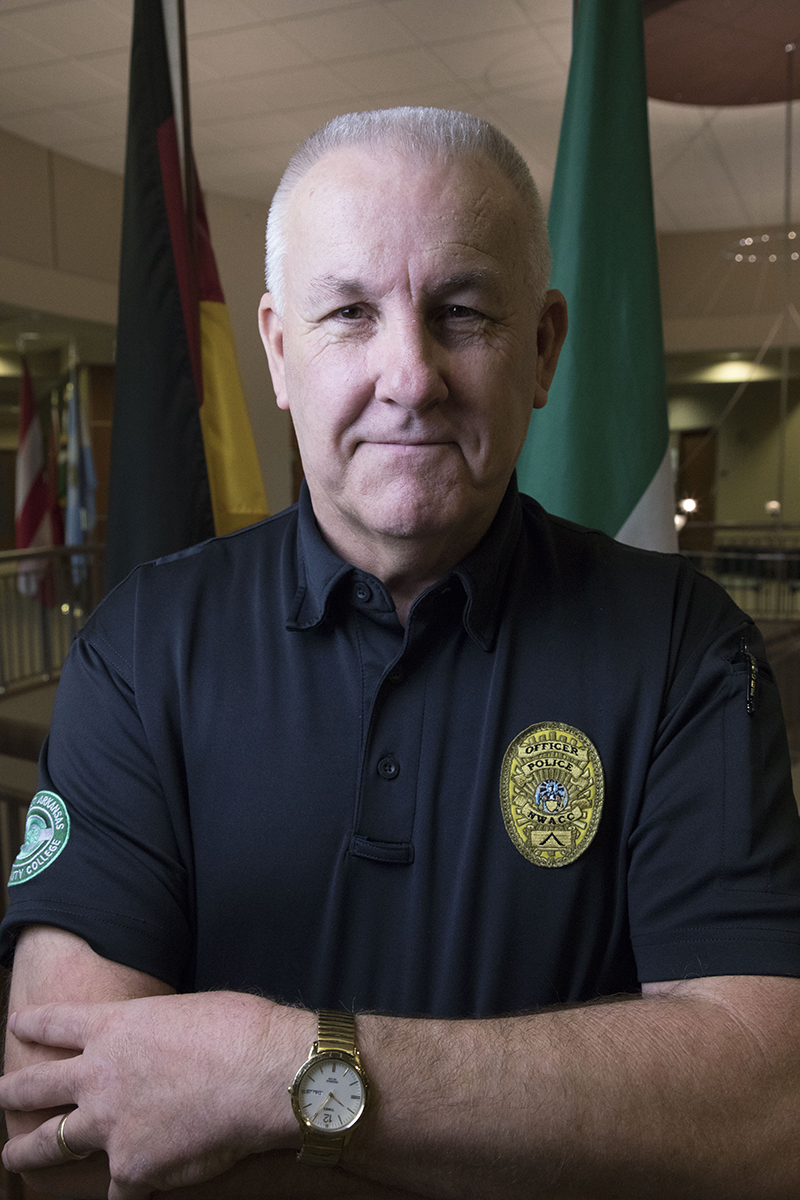 After 14 years of service to the NWACC community, Chief of Police Steve Tosh has announced that he will be retiring on June 1st. Chief Tosh currently oversees the planning, organizing, implementing and directing of the law enforcement and public safety functions of the college’s Department of Public Safety.

"Chief Tosh has been a blessing to all of us at NWACC throughout his 14-year tenure at the college. He has just the right mix of friendliness, kindness and concern, while also being able to competently and forcefully deal with difficult situations that may demand a stronger response. He was always welcomed while on campus, by employees, students and visitors. Most of the time, people could hear his whistling before he was within sight. That alone was enough to cheer everyone​ up!” said NWACC President Dr. Evelyn E. Jorgenson. “We will miss Chief Tosh, his smile, his whistling, his kindness and even his ugly sweater and Santa socks at Christmas. We wish him well in retirement and we hope he visits often!"

Chief Tosh has served in law enforcement for nearly 51 years. He began his career in 1970 at the age of 18 as a 911 operator for the Coffeyville, Kansas Police Department. At the age of 19, he became a certified police officer, the youngest ever recorded in the state of Kansas. For the next five years, he served as the city’s patrolman. From 1976 to 2002, Chief Tosh served the Kansas Highway Patrol, retiring as a sergeant. After his retirement, he continued his public service career by becoming a City Commissioner for the city of Coffeyville, and in 2007, served as the city’s vice mayor. In April of 2007, he moved to Arkansas and began his career at NWACC as a patrolman. In 2013, he was promoted to sergeant and then to police chief in 2015.

“I am very proud of my time at NWACC and making daily connections with students, staff and faculty. I don’t think I ever had a day that I didn't want to come to work. I’ve been very blessed to be able to work for NWACC and have thanked President Dr. Jorgenson on many occasions for the opportunity to serve the college,” said Chief Tosh.

Chief Tosh has received numerous awards and achieved many accomplishments throughout his career. Some include receiving the Jaycees Outstanding Young Police Officer award and being recognized by the City of Coffeyville for removing small children from a burning house in 1972, as well as receiving Outstanding Staff Member by Arkansas Two Year Colleges in 2008.

Chief Tosh served in the Kansas National Guard from 1970 to 1976 in the 174th Service and Supply Battalion and ended his tour as a sergeant. He served as a member of the Kansas State Troopers Association and the Kansas Police officer Association throughout his law enforcement career in Kansas.

He is an active member of Arkansas Association of Campus Law Enforcement Agencies (AACLEA), an organization of college police departments that share information and strategy on keeping campuses safe and law abiding, and a member of the Arkansas Chiefs Association, which collaborates with the state through legislation.

Thank you, Chief Tosh, for your dedication and service to NWACC, and congratulations on your retirement!