Dick Barclay has served as a state legislator, a community leader, and a member of the Arkansas governor's cabinet. Dick was on Governor Mike Huckabee's first executive team when the governor took office July 15, 1996.

Dick retired in 2002 as the state's Chief Fiscal Officer and Director of the Arkansas Department of Finance and Administration (DFA).

As DFA Director, Dick served as a member of the Governor's Cabinet and on several State Boards and Commissions. He served in the Arkansas House of Representatives from 1977 through 1992.

In 2018, the Rogers-Lowell Area Chamber of Commerce established the Barclay-Matthews Award for distinguished legislative leadership to honor Dick Barclay's service in the legislature.

As a member of the Arkansas legislature, Dick helped secure state funding for the off-campus program in Benton County, which served as the springboard for NWACC.  Later, he carried the legislative bill that authorized the creation of NWACC. He served as a member of the Board of Directors of the NorthWest Arkansas Community College Foundation.

Following his retirement from state government, Dick, a CPA, returned to private practice in Rogers with Beall Barclay & Company, PLC.  Previously, Dick was in private practice from 1961 to 1999.

Dick has been affiliated with and held leadership roles in the Rogers-Lowell Area Chamber of Commerce, First Christian Church of Rogers (Disciples of Christ), the Republican Party of Benton County, Rogers Little Theater, and many other organizations. Before being elected to the Arkansas House of Representatives, Dick served on the Rogers City Council from 1970 through 1977.

After attending public schools in Kansas, Dick graduated from Kansas State University with a dual degree in Business Administration and Social Services. He also attended graduate school at the University of Arkansas, Fayetteville. 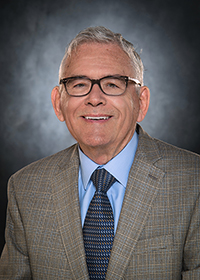